Charities, councillors, and the emergency services came together at Shotteswell Village Hall on Thursday 20th May to promote public awareness of, and access to, Bleed Control Kits in Warwickshire.  The Hall has already installed one kit and Ben Zammett, the Committee’s Chair, handed a second kit to Kim Slater, CEO of community charity WRCC, at the event.  This will be carried on board WRCC and VASA‘s new Mobile Warm Hub minibus, which travels round the county to help communities fight social isolation and loneliness.

The Bleed Control Kit was developed by the Daniel Baird Foundation, with input from the West Midlands Ambulance Service, following the tragic death of 26 year old Daniel from a stabbing incident in Birmingham.  Awareness of these kits has increased in urban areas and they have a vital role to play in saving lives in rural areas as well.  Someone with catastrophic bleeding from an agricultural, road traffic or domestic accident could die in only five minutes. 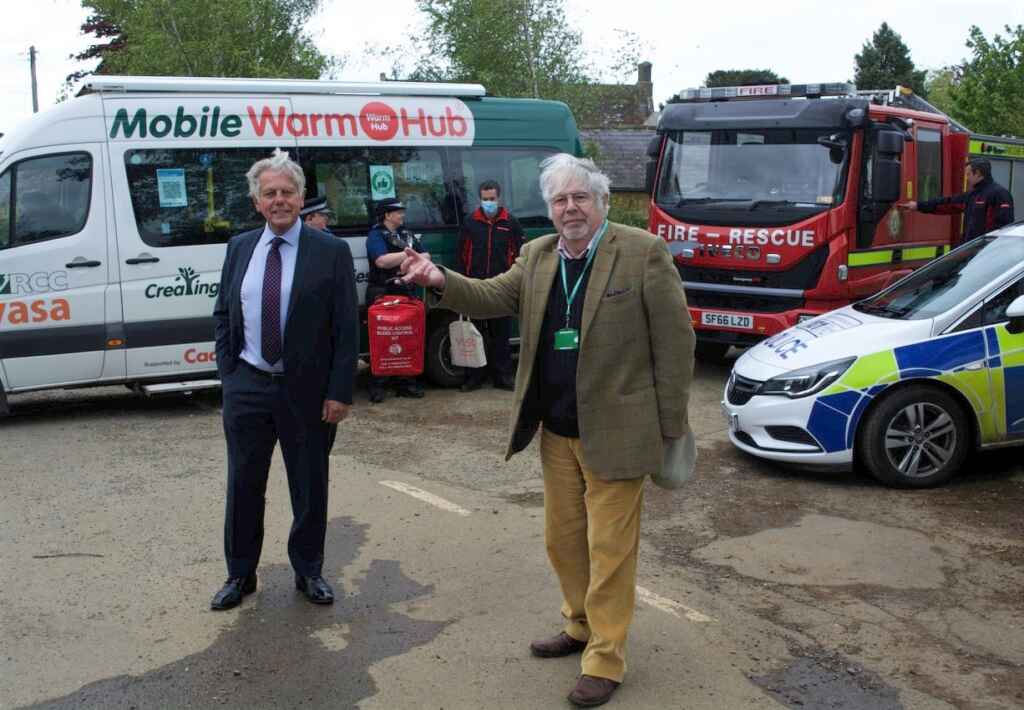 “Saving even one life makes a massive difference,” said County Councillor Chris Mills, “and it’s reassuring for residents to have this available.  Farming in particular is one of the most dangerous occupations.”  Research shows that workers in the farming, fishing and forestry sector are nearly four times more at risk of having a fatal accident than in the construction industry.

Stratford District Councillor John Feilding pointed out that road safety is another serious concern for many of those living in the countryside, with vehicles overtaking walkers, cyclists and horse riders at speed on congested, narrow roads across the county.  The more remote the accident location, the greater the need to control severe bleeding before first responders can reach the scene. 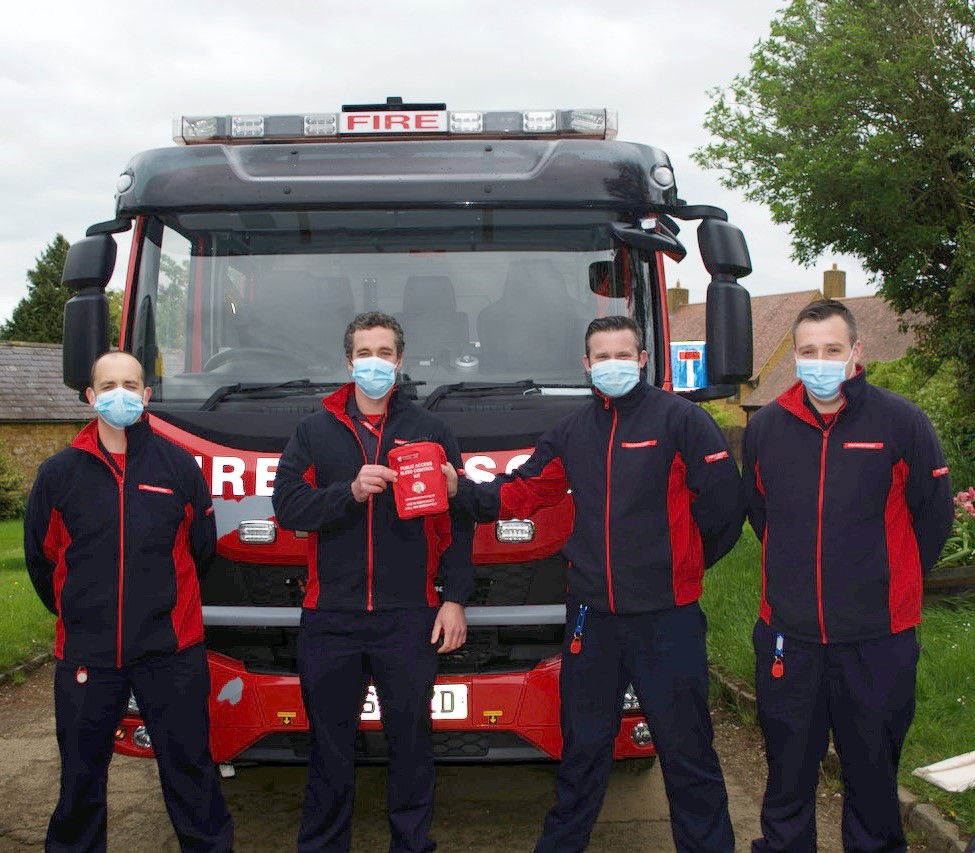 The Ambulance Service commented: “The Bleed Control Kits contain several items that really could make all the difference to a patient whilst ambulance staff are en route … we’re often first at the scene of a 999 call in a rural setting and so it’s great to know there’s a kit like this, which anyone can use to provide vital first aid to someone with catastrophic bleeding”.

Ben Zammett believes that having a kit is as important as having a defibrilator in public spaces, particularly in a remote location such as Shotteswell.  “Not only our residents but all rural communities would benefit from having publicly accessible Bleed Control Kits,” he said. “We’ll be including its use in all our first aid training and we’re keen to get the message out as widely as possible by using the Mobile Warm Hub service.”

Kim Slater, WRCC’s CEO, commented: “We’re delighted to support Shotteswell and our dedicated emergency services to help save lives in Warwickshire communities. Our Mobile Warm Hub service, run in partnership with VASA, means we can reach out to rural residents five days a week, as well as collaborating with other community service providers, so we’re very much on board to raise kit awareness throughout the county.  We’d also like to thank Shotteswell Village Hall and the Daniel Baird Foundation for donating a Bleed Control Kit.” 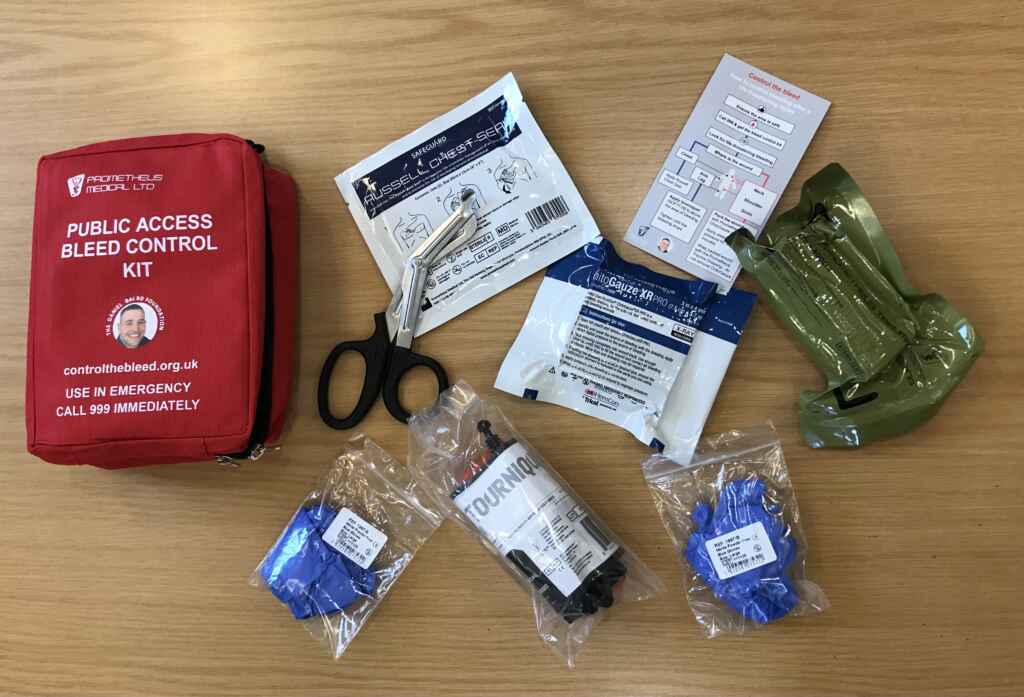 Each lightweight, portable Bleed Control Kit comes in a high visibility red pack and the high quality contents include a trauma dressing to control moderate bleeding, a haemostatic gauze dressing to control moderate to very severe haemorrhage, a dressing for emergency management of penetrating chest wounds, a tourniquet, gloves and scissors.  The Daniel Baird Foundation receives £5.00 from the sale of each kit.

You can find more information about the Mobile Warm Hub project here, or call 01789 777986 or email mobilewarmhubs@vasa.org.uk.